What technology stack to choose for web and mobile development in 2019? Appus Studio research

The most popular Front-End technology stack: React.js and Angular.js

Speaking about the most popular technology stack for front-end, we’d like to underline React.js and Angular.js. 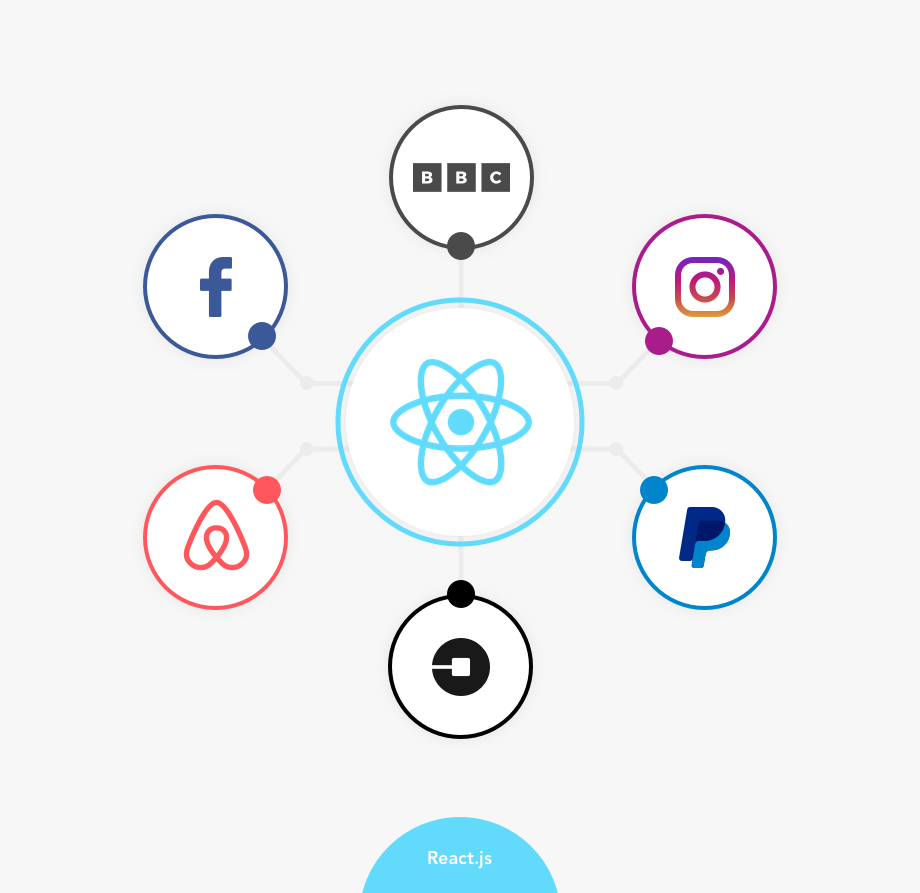 Well-known companies which use React.js

React.js is an open-source JavaScript library, introduced by Facebook in 2013, which is efficient and flexible for building user interfaces for developing web applications and platforms that need a very responsive UI. Via using React.js, a web application is broken down into autonomous components, which are able to be used again and reproduced without additional reloading of the page. With its ability to deploy adjustments in much effortless and faster ways and popularity over GitHub (with more than 120,000 stars), React.js is actively used by such organizations, besides Facebook, as Netflix, Instagram, Uber, PayPal, Airbnb, BBC, etc. So, it proves that this simple and lightweight library isn’t going to move from top positions in 2019 as well. 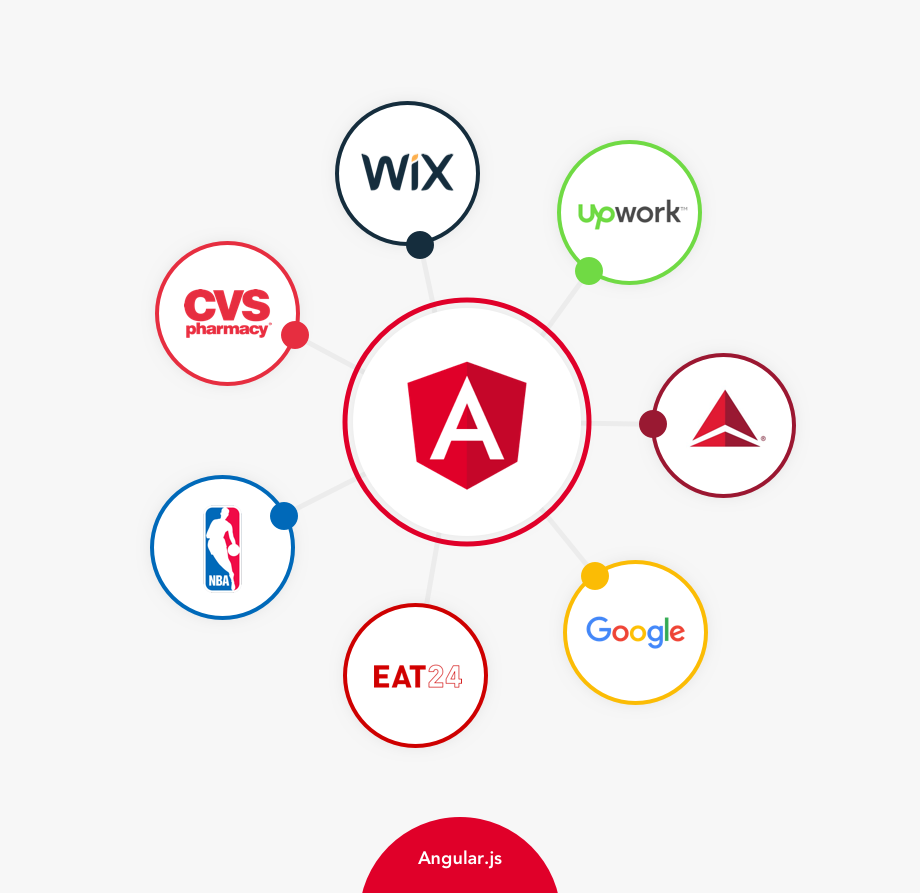 World-leaders who is attracted by Angular.js

Angular.js is a Model-View-Controller TypeScript-based Javascript framework created by Google in 2015, for building single-page web applications, landing pages, websites, and cross-platform mobile apps. At the end of 2018, it was produced the latest stable version - Angular 7. With almost 44,000 stars on GitHub, it occupies the 2nd place after React in the popularity of JavaScript frameworks, which are being used among developers.
Angular is used in more than 600 application in Google, such as Firebase, Console, Google Analytics, Google Express, Google Cloud Platform, etc. It is also popular among the following large companies worldwide as Upwork,  Delta, NBA, wix.com, CVS shop, Eat24. In 2019 it’s predicted that Angular will continue to be in high demand.

As for technology stack for Back-End, Node.js needs to be mentioned. 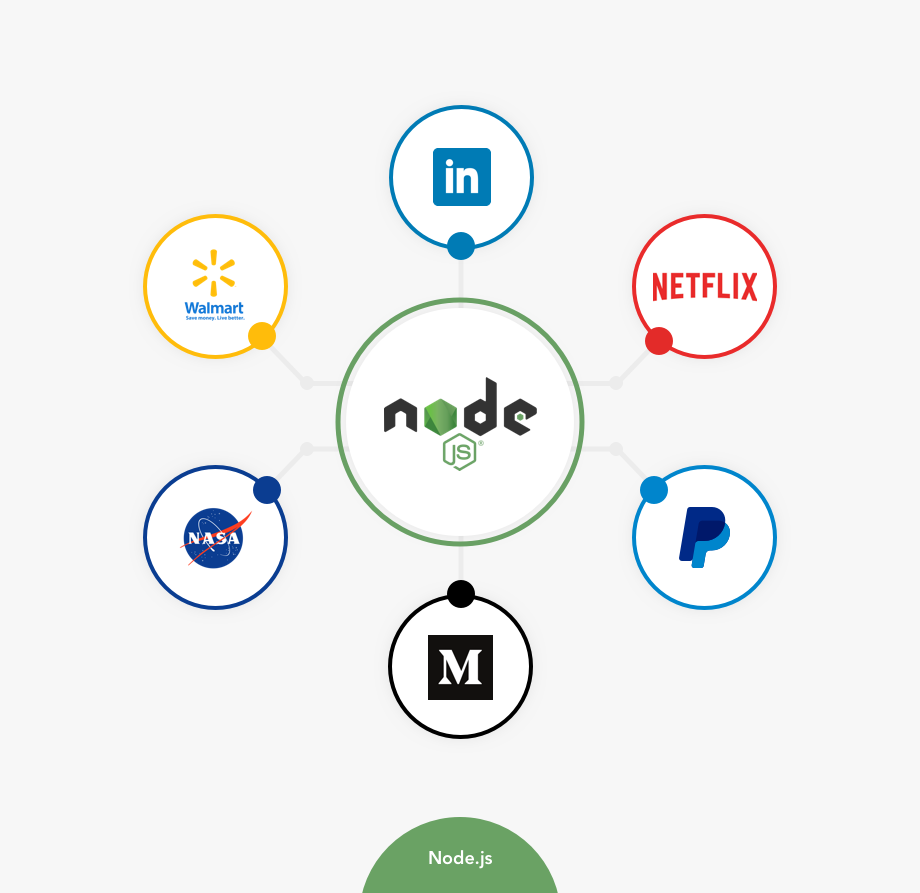 Top companies which use Node.js

Node.js is a platform built on Chrome’s JavaScript runtime for serving both client and server-side applications, which was originally written in 2009. Since then it’s popularity has been growing remarkably fast. According to Stack Overflow survey in 2018, Node.js occupies the 1st place among the most popular libraries and frameworks used by developers. The key advantage of using Node.js is the fact that for writing server-side and client-side coding, developers are using the same language - JavaScript. Due to the fact that the data between those two points are exchanged and synchronized easily, it helps to save a lot of time, as a result.
Node.js suits perfectly for the development of complex, powerful and data-heavy real-time applications, which include chat functionality, live streaming, and other tools for communication. The flexibility, simplicity, efficiency and high scalability of Node.js made it widespread among such world leaders as Netflix, PayPal, Walmart, LinkedIn, Medium and NASA. In comparison with the previous years, it’s expected even high growth of the popularity of Node.js.

Speaking about mobile development, that’s not a secret that iOS and Android have become the most popular mobile platforms. However, the question of finding the cure-all technology stack which will cover both platforms and, as a result, will save the time and cost for the development without decreasing the efficiency and overall appearance of the app, is still relevant. Therefore, cross-platform development will continue gaining its popularity. The most vivid representatives of cross-platform solutions are React Native and young, but up-and-coming Flutter engine. 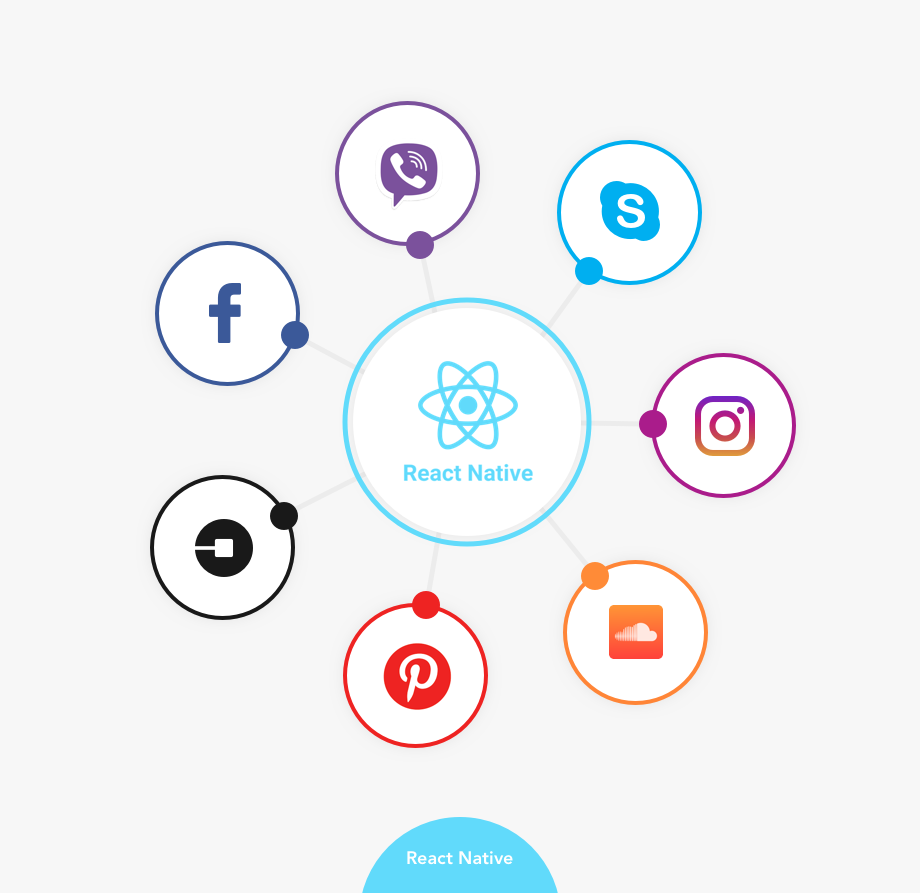 The companies which use React Native in their apps

React Native is a framework for mobile applications officially released by Facebook in February 2015 and became freely accessible in March 2015. By its compliance with for both iOS and Android platforms, React Native has become extremely popular and, according to Facebook, now is being used by 800 million people each month.
From the developer's side, React Native is attractive because they need to use JavaScript only, instead of two separate programming languages for iOS (Objective-C/Swift) and Android (Java/Kotlin). Another beneficial feature which actually can’t be found in the native frameworks: the ability to see the immediate result of the latest update in the code (Hot Reloading feature). From the client’s perspective, React Native is a time-saving and cost-effective solution. A variety of companies implement React Native in their apps, besides Facebook: Skype, Viber, Instagram, Pinterest, SoundCloud, Uber. 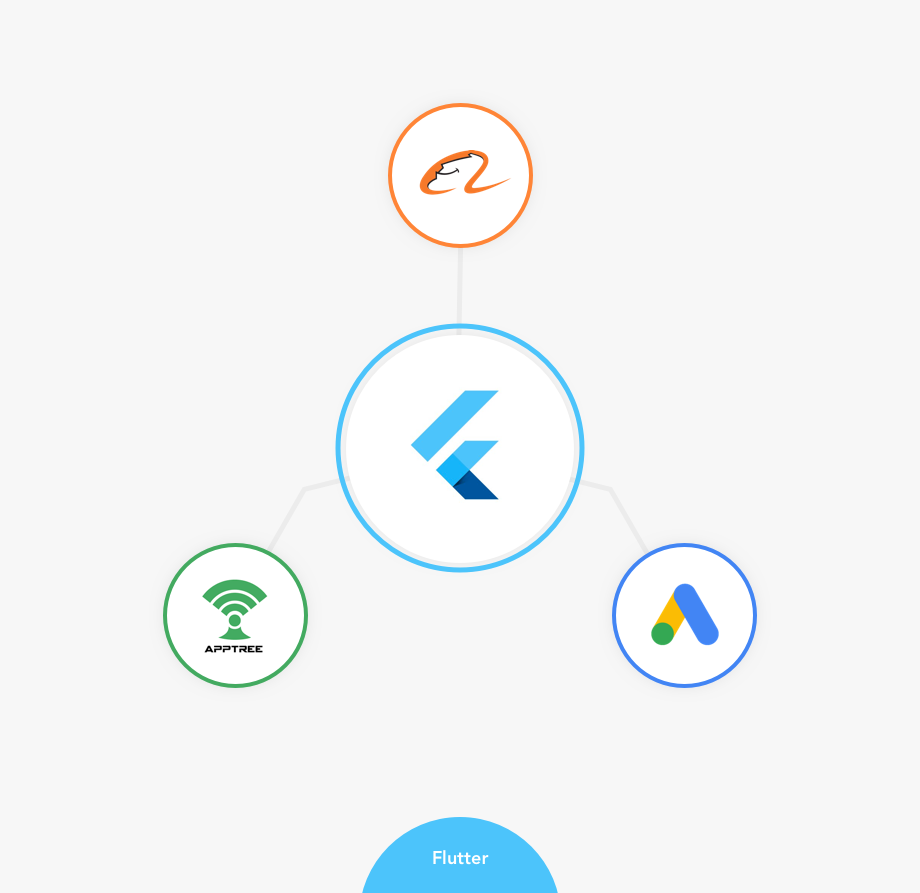 The companies which implement Flutter in their apps

Flutter is an open-source mobile development framework launched by Google in 2017 and has started gaining its popularity mostly in 2018. So, it’s quite a young framework, in comparison with others, but up-and-coming at the same time. The apps developed on Flutter are also compiled with both iOS and Android platforms, but via using Dart language.
In comparison with other hybrid mobile development solutions, Flutter doesn’t require the “bridge” to connect the coding part with the platforms, which speed up the development process a lot. Flutter has already been used for the development of the app for Alibaba, Google Ads and AppTree. Therefore, it’s highly recommended to keep an eye on it in 2019.

Despite the fact that technology trends are changing fast and sometimes it’s really hard to follow them, in terms of web and mobile technology stack the situation in 2019 is pretty stable. In web development, JavaScript frameworks will keep occupying the leading positions among others. As for mobile development, the battle between native and cross-platform solutions will continue with the advantages in favor of cross-platform. The new technology which shouldn't be underestimated in 2019 is Flutter.
However, don’t forget that choosing the right technology for your future app depends on its requirements and functionalities which need to be implemented!